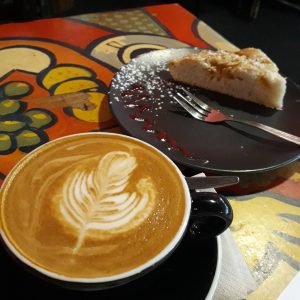 At first look, the slice was triangle shaped, with the colour slightly reminiscent of white in the middle with a lightly brown top and bottom. The top itself was lightly flaked with almonds and divots housing little pieces of apricot. Icing sugar shaken gently over top with apricot sauce on the side of the plate.

The texture appeared as bread or sponge. However when firmly explored with a fork, it was found to be rougher than its appearance. On the whole, the slice held its shape well with little crumbling.

On a more sensory exploration, the texture was found to be surprisingly firm and stoggy. Crisp browned almonds topped around a contrasting sweet apricot sauce, which highlighted a rather conflicted delight. The distinguishing flavour was a smooth, packed, almond meal. Although far from sweet, with a taste resembling aniseed, the promising slice slightly bitter short aftertaste on the back of the tongue. If not for the apricot sauce it would indeed have become quite plain, and almost savoury.

I left the delicacy unfinished, due to the rather rich composition; and took the remaining morsels home for the rest of the family. I would really rather have had more apricot throughout, accompanied by an increasing flavour, perhaps of citrus. Would I have it again? Definitely, it nostalgically reminded me of my rather Mediterranean upbringing. 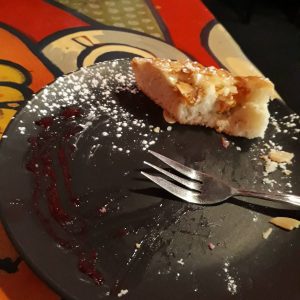 Simone Godde is a highly credentialed having both a Bachelors and Masters of Science, Nutrition and Dietetics. She takes a holistic approach to health and well being then tailors it to her clients needs. She works hard to be engagingly empathetic, enlightening and empowering.